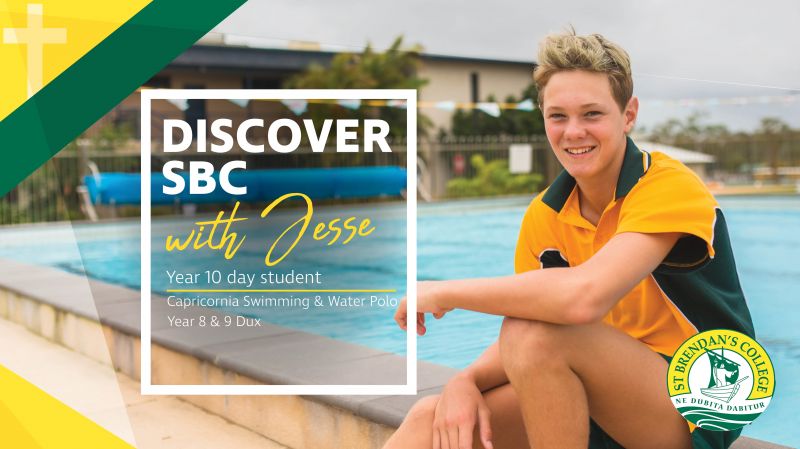 A young man with a mature head on his shoulders, Year 10 day student at St Brendan’s College, Jesse Laverty is juggling a significant academic work load, having achieved Dux of his year in Years 8 and 9, and a significant training regime with recent selection in the Capricornia Teams for Swimming (13 to 19 years) and Water Polo (13 to 17 years).

Jesse will head to Brisbane on Thursday 28 March 2019 to compete in the Queensland School Sport (QSS) State Swimming Championships in the 100m Breaststroke, 200m Breaststroke and 400 Individual medley and will back that up as a senior team member in the Capricornia Water Polo Team at the 13-17 years QSS Water Polo State Championships, to be held in Rockhampton from 27 to 30 April 2019.

Testament to the saying, ‘if you want something done, give it to a busy person’ Jesse juggles swimming, gym and water polo training at least four hours per day, five days per week, regular swim meets and school water polo competitions, with an academic program in which he excels.

Studying Extension Science, Extension English, Extension History, Specialist Mathematics within the College’s journey system, as well as Business, Health and Physical Education and Religious Education, Jesse has a tough year ahead, but after attaining seven A’s to be awarded Dux of Year 9 in 2018 he has every chance of success.

Jesse’s long-term aim of reaching the Olympics is also a high one, but with the attitude and discipline that sees him perform at a high level across academic and sporting life, it is certainly attainable.

“My long-term aim is the Olympics; my short-term goal for 2019 is to be at the stage where I can make qualifying times for next year’s swimming nationals,” Jesse said.

“I’ve wanted to make nationals for a few years, but it just hasn’t happened with a few hiccups,” Jesse said.

“There’s a lot of discipline to learn in swimming; time management, team skills, the ability to push yourself that bit harder, physically and once you learn to do that, you can do that mentally,” he said.

“And for me it’s also helped cope with failure; I have had a few hiccups not getting where I want to be for various reasons, but it does help you to overcome that and keep going.”

“I love swimming; I reckon it helps me; it keeps me busy and focussed.”

When questioned about the loneliness of the black line in swimming, Jesse gives water polo as his solution.

“People say swimming is a lonely sport, and I guess water polo is related to swimming, but it’s a team sport which I love.”

“I originally joined the SBC Water Polo team for a bit of fun, but it’s starting to become competitive which is great.”

The College’s Water Polo teams are also on the rise, increasing in participation and achievement with both Junior and Senior teams performing strongly in Central Queensland school-based competitions, and selection for a number of students in the Capricornia team.

For a young man whose spare time is minimal, Jesse’s ability to study in the car, at the College library on rare afternoons when training starts later, and to make use of class time wisely, is something other students can learn from.

“I do use my class time; if I’m working through a worksheet in class and we get homework; if I can get that done in class time that’s a bonus,” he said.

His advice for new students at SBC: “Don’t waste your time, get your priorities right; and even if you do have a lot on your plate, don’t just give up on something, try and work it out first, and keep challenging yourself.”

A wise young man, especially so, when he’s ferried to and from swimming from 5am to 7am and 5pm and 7pm daily and to regular swim meets all over the State by his mother, his last words for the day – “A shout out to my Mum.”

“In partnership with parents we work to give our students every opportunity to excel in their academic and extra-curricular pursuits and to give them the knowledge, skills and personal attributes that will make them good citizens and successful on their future journey, whatever they choose,” Mr Corboy said.

St Brendan’s College is the leading choice for boys’ education in Central Queensland; a Catholic day and boarding School in the Edmund Rice tradition catering for young men from Years 7 to 12.  The College is located on 300-acres at Yeppoon and offers a diverse curriculum and extra-curricular program.  For more information please visit www.stbrendans.qld.edu.au