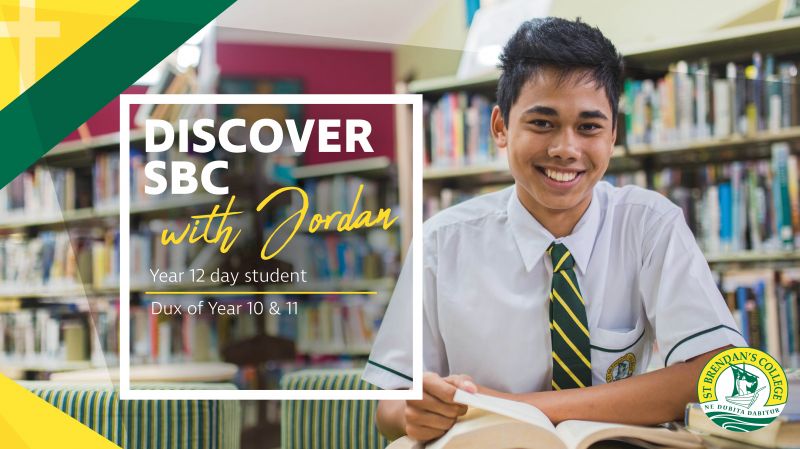 This week Year 12 St Brendan’s College student Jordan Wall will sit alongside his classmates to undertake the last Queensland Core Skills (QCS) Test in Queensland ahead of the release of the final Overall Positions (OPs) in December 2019.

As a successful swimmer and triathlete at State level and a high achieving student having attained Dux in Years 10 and 11, Jordan certainly knows how to work hard; and with senior studies firmly on his mind he made the decision to step back from sport to give himself every opportunity to excel in his OP.

Deputy Principal and Head of Curriculum Mr Paul Horan said the College worked hard to prepare its OP students for the Queensland Core Skills tests, taking them out of scheduled classes to undertake a QCS camp in the lead-up to the important test and scheduling in regular testing in the lead-up to the QCS on 2-3 September 2019.

“Every cohort is different and we work with the boys individually to track their marks to give a better idea of where they may sit at the end of Year 12,” Mr Horan said.

“Our predictions show that based on Jordan’s achievements in the past 12 months we expect him to achieve at the highest level, achieving an OP 1-3 come December,” Mr Horan said.

“We recognise it is important for our OP students to prepare fully for QCS and have worked hard with them on practise tests throughout the year, reinforcing the importance of deconstructing questions effectively, identifying clues and models in the questions,” Mr Horan said.

“We have performed strongly in QCS testing in recent years, and in fact, we received advice from the Federal Government in January this year of the fact that St Brendan’s College 2018 Year 12 cohort were in the top 9 per cent of 370 Queensland high schools, as it related to gains from their 2015 Year 9 NAPLAN results compared against their OP data.

“We provide opportunities for academic students wanting to excel like Jordan and those students with trade careers or other pathways on their mind,” he said.

According to Jordan the message from Mr Horan who leads the QCS testing sessions is clear.

“Come prepared and do not underestimate the test,” Jordan said.

And as the Year 12 students count down their final weeks, Jordan is looking towards a career in engineering after graduation and has recently commenced an internship with local business Capricorn Engineering and Drafting Services (CEADS).

An opportunity made available to students at the College, Jordan is in the midst of the ten-week internship supporting a project designing the master plan for St Brendan’s College and is gaining exposure to many elements he will come across in his engineering degree.

“I am really enjoying it; it was slow at the start trying to get my head around the 3D modelling, but it will be a big part of engineering so it’s good to get a head start on the engineering program,” Jordan said.

As a straight A student excelling in his subjects - Mathematics B, Mathematics C, Physics, Study of Religion and English, Jordan certainly could have chosen any career, and with his love of sport did consider undertaking physiotherapy or a sports-related course.

“But I’m good at maths, and I’m enjoying my internship, so I’m looking to study the Co-operative Engineering Degree at CQUniversity where you have the opportunity to do two six-month work placements as part of the course,” Jordan said.

Asked what his advice was for students coming after him, Jordan had some wise words.

“Get your work done in class, but don’t block your mates out completely.  Stay focused on your work and work hard but enjoy doing it.”

Jordan is adamant he will leave as a proud St Brendan’s College student, but as a typical senior was fairly sure of the number of days to go before he walked out the gates for his final time as a graduate – “I think we’re in the high 40’s now!”