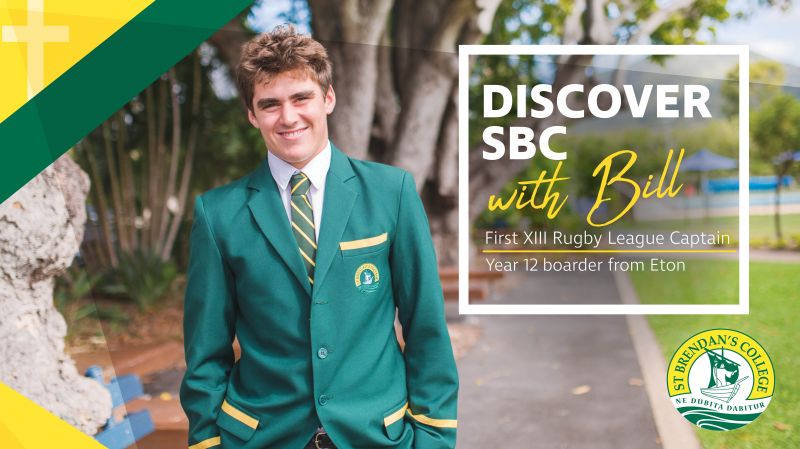 Following in the footsteps of some of Queensland’s biggest rugby league stars, Year 12 boarder, Bill Gunning will lead St Brendan’s College First XIII onto the field as captain in Bundaberg on Monday 1 July at the renowned QISSRL Confraternity Shield carnival.

After the 2018 St Brendan’s First XIII were knocked out of the main race with a loss in their pool games and took out the second-tier Bob Lindner Trophy, the 2019 First XIII are knuckling down in training for a strong showing and hope to be in the mix for the Confraternity Shield.

With co-captain Sam Strohfeldt, Gunning is expected to lead the team strongly, with long-time coach Terry Hansen setting them a big task.

“Our job is to lift the team, and Coach says that the team performance comes off the back of us, so we need to be positive on the field, talk to the boys and make sure everyone else is positive and strong,” Gunning said.

“We’re going in hoping to be one of the top contenders to win this year,” he said.

“It’s such a big carnival for school rugby league in Queensland, and it’s a pretty big deal to win it, but even just to participate in a team like St Brendan’s that has such a good history is something special.”

“For me personally, it would be good to make the Queensland Confraternity side, but I just look forward to doing my job, lifting the team and our team playing strongly.”

With wins against Confraternity Shield contenders Rockhampton Grammar School, Ignatius Park and The Cathedral College during the Aaron Payne Cup season, SBC go in as a strong challenger, but with 2019 Confraternity Shield winner St Mary’s Toowoomba their second pool game on Day 1, it will not be an easy task.

And with SBC Old Boys such as Anthony Seibold, Corey Oates, Ben Hunt, Paul Bowman and Matt Scott having run out for St Brendan’s College at Confraternity, there is an added element of pride and pressure for the boys in the green and gold jerseys.

But while football is top of mind for Gunning and the other Year 12 boys in the First XIII side as they chase Confraternity and Aaron Payne Cup triumphs in coming weeks, they have a team of educators behind them working to ensure they are well prepared for a strong future, whether rugby league is in the mix or not.

Asked if he wants to chase a career in rugby league, Gunning is non-committal.

“I think the option is there, but I’m hoping to get a trade as an electrician or auto-electrician.”

“I’ve applied for apprenticeships with Komatsu in Mackay and Rockhampton already and am just waiting for the Hastings and Ergon apprenticeship programs to open and I’ll apply for those as well.”

Having grown up learning from his father working on machinery as part of the family's state-wide haulage business based out of Eton near Mackay, DK Gunning Haulage, Gunning is no stranger to the trades.

Learning from experienced trades people and educators in the St Brendan’s College Manual Arts Department, Gunning believes that the students get the best opportunity to be work ready and well prepared for trades when they leave the College.

“Definitely that’s true; we’ve got Mr Holzheimer, who has just come from working as a diesel fitter on the job, I learn a lot from him; Mr Green and Mr McFarlane, they all are experienced and know what they’re talking about,” he said.

Whatever his career pathway, Gunning is confident he will leave the College at the end of 2019 not only job ready, but with a strong brotherhood and mates that will stay with him for life.

After hearing plenty of stories from his father, SBC Old Boy Senior 1990 Damien Gunning, Gunning was keen to leave home and school in Mackay in Year 10, to experience the St Brendan’s College boarding offering for his senior secondary years.

“I’ve made good mates, from boarding and footy, I’ve experienced the same things as Dad, just with different stories and different people,” he said.

His advice for new boarders and new students - “Not everyone gets the opportunity to come here so if you come here, don’t sit back and think about what you could be doing at home, get in and take advantage of every opportunity available.”

“It doesn’t matter what your interests are – whether it’s chess, debating, sport, there’s something for everyone and they keep you busy, especially now with Boarding Recreation Officer Mr Gorrie,” he said.