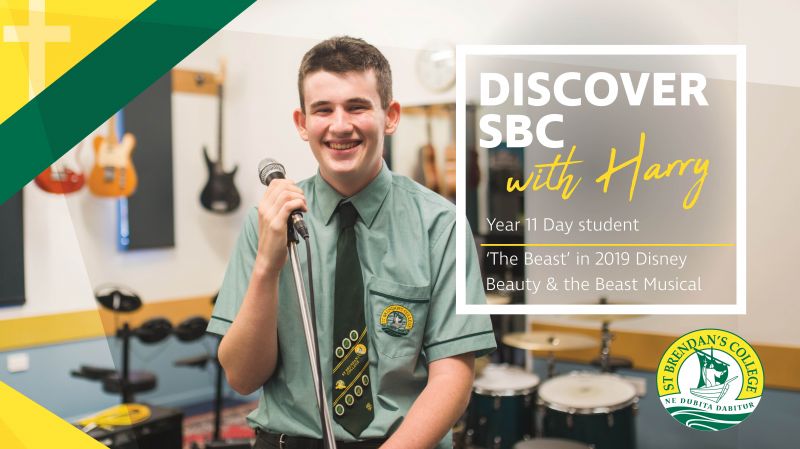 Year 11 student Harry Shepherd has taken on a mammoth task for his stage debut as the Beast in the combined St Brendan’s College and St Ursula’s College Disney Production of Beauty and the Beast, to be performed at the SBC Performing Arts Centre from 20 to 27 July 2019.

Harry secured the main role in the production as the singing, dancing and sinister-turned hero Beast, alongside a cast of more than 40 talented students from the two colleges, and although he plays the violin, guitar and saxophone and has taken singing lessons for a number of years, the 2019 musical will be the first time he has tried his hand at acting.

“I used to see lots of senior boys performing in the musical roles, and over the past few years I have been getting more involved in the music department, so I thought I’d put my hand up to be a part of this year’s Musical.”

Harry will be joined by a stellar young cast which includes: Annie Emery and Jessica Keily as Belle, Minette Boyd and Ellen Walsh as Mrs Potts, Blake Jarman and Dayne Linke as Gaston, Lillian Lawrence and Chloe Simmonds as Cogsworth, Caleb Bartlett and Bailey Howard as Lumiere, Darby Twidale and Harry Hersey as Lefou and many more!

While Harry admits he still gets nervous performing in front of a crowd, it is something he is starting to get used to, which is certainly beneficial, as with a seating capacity of more 500 for each of the three public shows at the SBC Performing Arts Centre, the cast and orchestra will be performing to significant crowds.

“Being involved with the Musical is great all-round, working with other people as well as being a part of something bigger than yourself. It always feels good to contribute towards a performance people can enjoy,” Harry said.

“It’s been quite heavy with three practices per week since February but I think it’s actually been better for my study because it has forced me to plan ahead; you can’t leave it until the last minute, you have to be organised and be in a routine of study and practice,” he said.

“He has been extremely dedicated; he’s hardly missed a practice, and while he started quite tentatively, he has really thrived and has a very good singing voice,” Brother Grundy said.

“I believe involvement in the musical is without a doubt the best co-curricular activity young people can take part in; boys and girls working together, and with so much madness in our world, working together on something constructive and beautiful is important,” he said.

The scene is set by narrator Year 12 student Darby Twidale, who takes the audience on a journey to a faraway land to a spoiled, selfish prince who was turned into a hideous Beast by an old beggar woman, who asked for shelter from the bitter, winter cold at his castle, in return for a single rose. The old beggar was turned away, and as a result she placed a powerful spell on the castle and all who lived there.

Ashamed of his monstrous form, the Beast concealed himself within the castle with a Magic Mirror his only window to the outside world. But the rose the old beggar woman gave, was truly enchanted. If the Beast could learn to love another and earn their love in return, the spell would be broken!

Brother Grundy previewed one of the highlights of the night, a beautiful singing soliloquy by Harry, the Beast, to end Act 1, which reveals the story that when you love someone, you transform.

Tickets are available at SBC reception from 8am to 4pm weekdays, or via https://www.trybooking.com/BCXEG. Ticket prices are $18 per adult, $10 student/concession, $50 family ticket (2 adults, 2 children) and under 5 gold coin donation.

For Harry the intensity of the Disney Production of Beauty and the Beast Musical will be quickly followed by performances at the renowned Queensland Catholic Schools Music Festival in Brisbane in August as he and a large contingent from St Brendan’s, travel to perform in a number of ensembles with Catholic schools from around the State.

A high achiever in everything he does, Harry also has music on his mind at school as he undertakes ATAR Music, in addition to Chemistry, Biology, Mathematical Methods, English and Study of Religion as part of his Year 11 academic load, achieving top marks across all subjects.

“At the moment I am leaning towards studying something in the science field, possibly veterinary science after school, but music will always be a big part of what I do; I love it, and at university, music is a great way to earn money with small gigs around town,” he said.

St Brendan’s College Principal Mr Robert Corboy wished Harry and the entire cast, orchestra and crew of the combined musical the very best for their performances during July.

“These students and staff have put so much time, energy and effort into Beauty and the Beast and we call on our SBC and wider community to come and see the talent we have in our midst,” Mr Corboy said.

St Brendan’s College is the leading choice for boys’ education in Central Queensland; a Catholic day and boarding School in the Edmund Rice tradition catering for young men from Years 7 to 12. The College is located on 300-acres at Yeppoon and offers a diverse curriculum and extra-curricular program. For more information please visit www.stbrendans.qld.edu.au